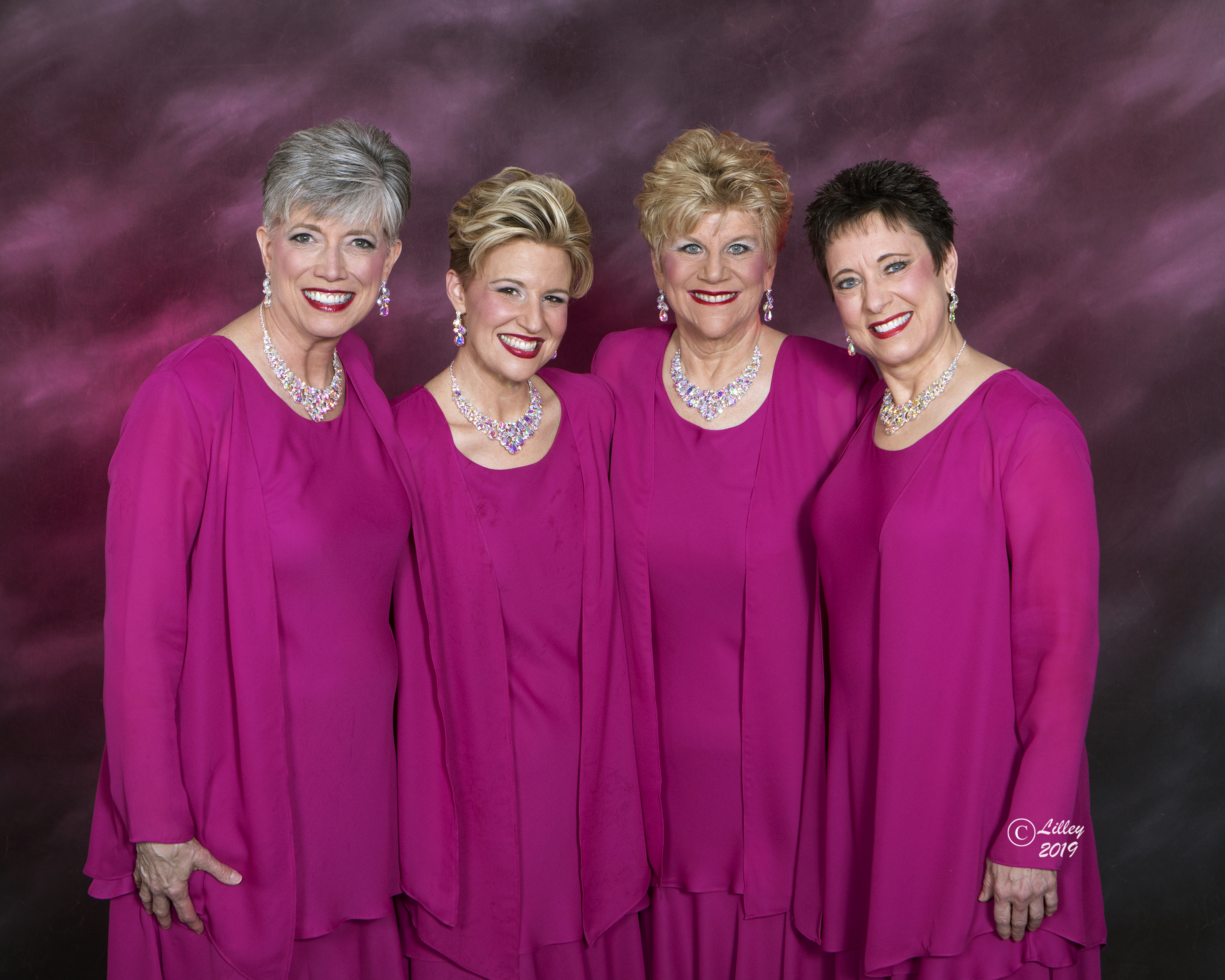 Surefire Quartet formed in April of 2013 and quickly decided that five hundred miles of travel was a walk in the park for four quartet-savvy women who really, REALLY wanted to sing together.  Their diligence has paid off, winning their first Regional competition in 2015, and securing a wildcard invitation to represent Region 17 in St. Louis at the 2018 International Quartet Competition.

Lead Sara Clevenger joined Sweet Adelines at the age of 14 and soon became the youngest quartet medalist in the history of Region 2 (Michigan/southern Ontario) singing with mom Lynne in Fandangle quartet.  Sara is a respected musical leader in the Greater Harmony Chorus in Pittsburgh, PA.  Sara holds a Bachelor of Fine Arts degree from the University of Tampa, and is a Mergers & Acquisitions Advisor at Blue River Financial Group.

Bass Lynne Peirce directs the award-winning Battle Creek Sweet Adelines Chorus and is a popular vocal and visual performance coach for choruses and quartets in both Sweet Adelines and the Barbershop Harmony Society.  A Sweet Adeline nearly two decades with comedy quartet Novelty Shop. Lynne retired in 2012 from her role in organizational development from the University of Michigan Health System and lives in Ann Arbor.

Baritone Lisa Beckett earned her first blue ribbon singing lead in Sigh-tations in 1983.  A Sweet Adeline since 1976, Lisa has been a musical leader in several choruses and is a popular coach.  She currently sings with the Greater Harmony Chorus in Pittsburgh, Pennsylvania.  She was the gold-medal baritone with BLAK Velvet, Region 17 2006, 2008 and 2010 championship quartet.   Lisa works in logistics at Nord-Lock, Superbolt Inc. and lives in Monaca, Pennsylvania.

Tenor Dawn Seigneur is the musical director of the River Raisin Chorus in Monroe, Michigan.  She was a charter member of Pride of Toledo Chorus and performed with them eight times on the International stage.   Dawn sang tenor with the 2008 and 2009 Region 2 quartet champions, In Voice. Dawn works as a physical therapist and is a Yoga and Tai Chi instructor at Sukha Yoga in her hometown of Delta, Ohio.

Surefire reflects a remarkable journey of experiences and miles well-traveled.  We know you will find the unique and exciting blend of voices, hearts and spirits an unforgettable combination!